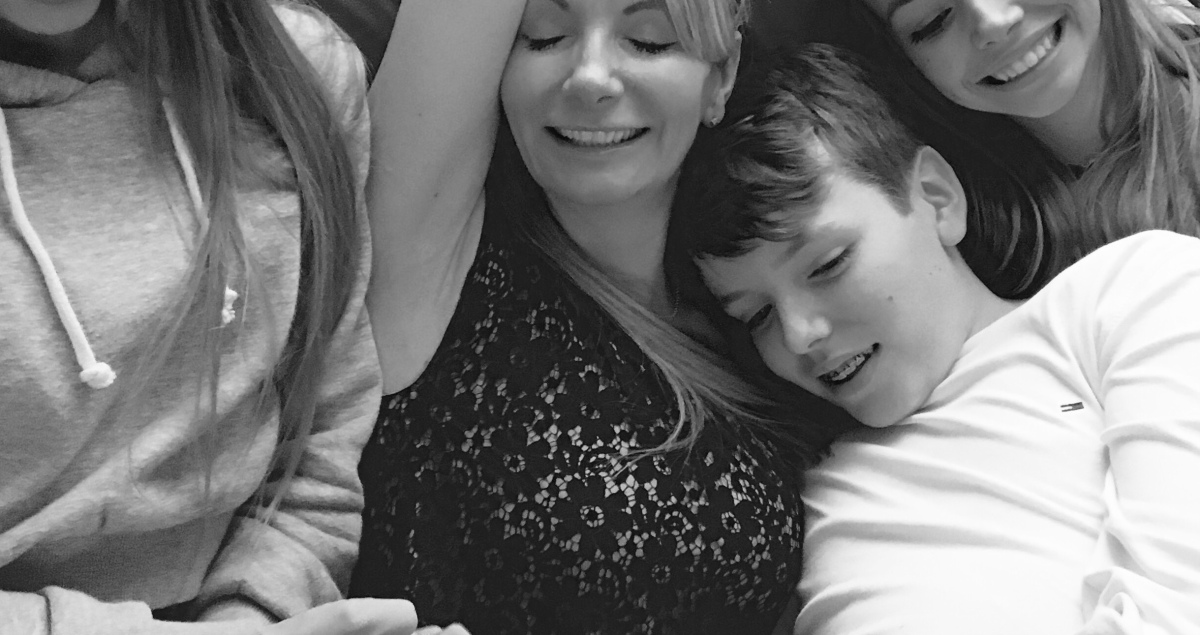 Reminiscing is a wonderful thing. Having time to reminisce even better. The Christmas break allows you some of that time, in-between actual Christmas and the New Year, where the days don’t count as real days, almost monopoly money like. They are film days. Not days where you watch films but the ones where you envisage yourself in a film. Days spent so entirely different from every other day of the year that they can’t be viewed as anything other than make believe. The absolute perfect time to reminisce, the perfect gift.

I’d just stepped out of the shower to squeals of “Mummy, you have to come see this!” There were peels of laughter, shrieks of embarrassment and heaps of “aww you were so cute” to “what on earth am I wearing?” Ah, this could only mean one thing, they had found the old videos.

Wondering into the room to find them all curled up on the bed was bliss in itself. They are teens. This does not happen. Limbs entwined with not a peep of “get off me you freak” to be heard. Definitely a film-like state. A moment to be treasured.

“Oh, Mummy, look at you!” And there I am, no longer a mother of three teens but as a mother of three smalls aged five, three and one. I don’t recognise me. We aren’t talking about the ageing here but the person I was – insecure as a parent – trying to manage the total chaos of it all whilst trying not to be filmed – no easy feat. Oh times have changed says the vlogger! I’m not her anymore. My children have changed me. I’m no longer trying to be a mummy. I am Mummy. Children growing do that, I guess. I’m not playing at this motherhood thing anymore. I’ve settled and that feels good – still refusing to talk about the ageing – just focussing on the personal feeling here!

However, I’m trying to work out whether it’s the children growing or me hitting 40 that has done it but something has changed. I am definitely no longer acting the role of parent. I might even have thrown a little bit more of being me into the equation along the way. Don’t get me wrong, I adore being a mum but it feels good to show my children the daughter I am, the sister, the friend, the everything. There’s something in me that wants them to know all the parts, all the roles and not to be too defined as Mummy.

It’s very obvious to talk about the way the children grow when you look back over old films and I’ve a whole blog on that to come. In fact, I was going to write that one first but the feeling of accepting motherhood, now they are teens, developed as I started to write. I feel more confidence now. There’s a happiness to question more. An acceptance of my inabilities but also my strengths has appeared. Definitely a sense of completeness. There is so much to be said for motherhood changing you. It does, unquestionably, but never more so than now do I feel that I have accepted motherhood.

In the beginning everything is so new. You lose yourself in what you think the role should be, how you think you should parent. You immerse yourself amongst the torrent of advice. There is no time, never anytime (!) to take stock and work out how you want to do it and almost before you have that time they’ve grown, you’re doing it, you’re parenting, you’re lost in it. Then, out of the blue, you catch a glimpse of that young mummy you once were (still not discussing ageing) and you glance at your three teens giggling on the bed, laughing at it all, and you’ve done it. You’ve done that whole motherhood thing. It worked! No overthinking, no questioning. It just worked and this huge feeling of owning motherhood for what it really is, is so powerful. Yes it’s probably a huge dose of pride and immense love but it feels like more than that.

So, for all of those who haven’t teens yet, who are battling the terrible twos, the threenagers, the bit in-between and the tweens, try not to overthink. It does just seem to happen. Yes, with hideous amounts of lost sleep and copious amounts of wine/gin but it  happens and, as long as all the right ingredients are added to the pot, it’ll be OK – they’ll be OK! Then, with a few more wrinkles (not too many, I hope) and a good dose of love they’ll be the gorgeous people that you have worked so hard at raising to be … just saying!